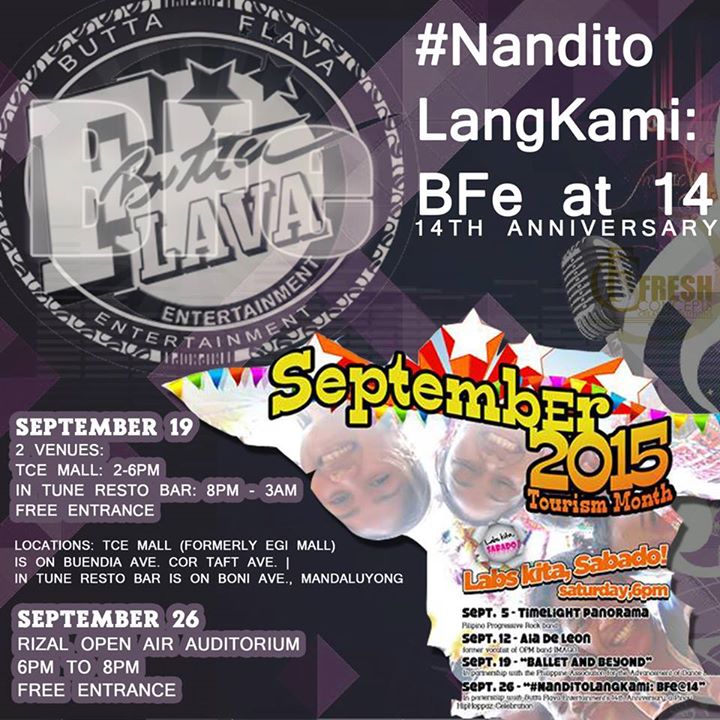 Butta-Flava Entertainment in cooperation with The Pinoy Hiphoppaz Organization presents:

ButtaFlava Entertainment, one of the most active and one of the most respected movement/group in the Philippine underground Hip Hop Community will be celebrating their 14th Year Anniversary this coming September 19 and 26, 2015.

The event will be on two (2) different venues and timeslots on September 19, 2015 (Saturday) which will be held at the TCE Mall (formerly EGI Mall) on Buendia Ave. cor. Taft Ave., Pasay City from 2PM – 6PM. Another event will be held on the same date at In Tune Resto Bar on Boni Ave., Mandaluyong City from 8PM onwards. Admission is free so you can bring your friends and enjoy the show for FREE.

Aside from the event on September 19, you can also catch the performance of BFe and the Pinoy HipHoppaz on a separate date on September 26, 2015 (Saturday) at the Rizal Open Air Auditorium from 5:30PM to 7:30PM which will be featuring selected members of both BFe and PHH.

If you want to perform or have a slot at their events, just contact BFE at: https://www.facebook.com/OpenMicHype.BFe then message them with your name and a.k.a., group or affiliation and contact number.

Music will be powered by: DJ Flash