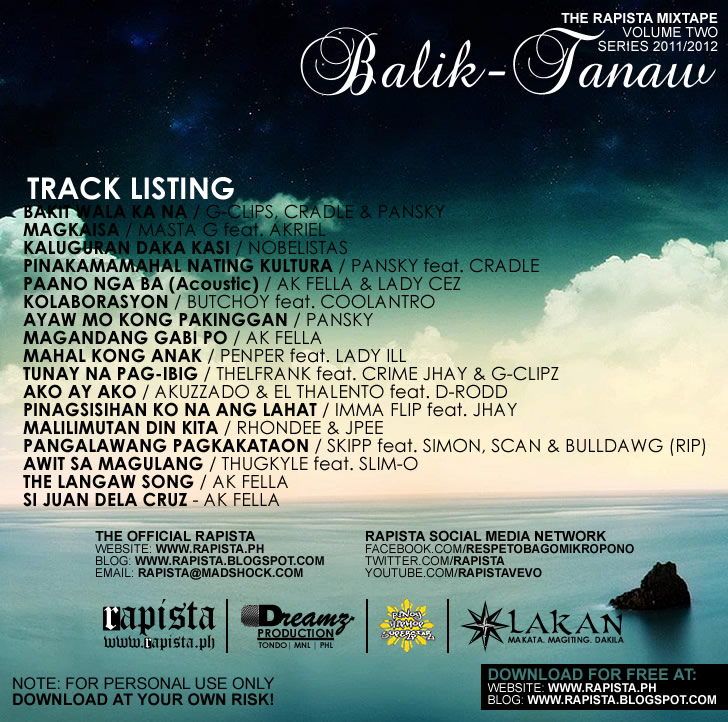 The Rapista Mixtape Volume 2 is out now for DOWNLOAD!

The Rapista Mixtape Volume 2 titled “Balik-Tanaw” is now out and ready for download. This is the second mixtape release of Rapista.

The concept of the second Rapista Mixtape was actually intended for the older rap songs, for us to reminisce and take a look back, to listen to these songs once again and giving them a new life. Old is new thereby fitting to name it as “Balik-Tanaw”.

“Balik-Tanaw” covers year 2011 and older but due to long period of time prior to its release and it’s not easy to catch up with the backlog, we include the Year 2012 and making the Rapista Mixtape Volume Two as a Double-Year 2011/2012 Back-to-Back Mixtape.

Original release of the Rapista Mixtape Volume 2 was planned in early of the first quarter of 2013 but circumstances prevents its release thereby resulting to delay it on the last quarter of the year. The release date was moved on Eve of Christmas of 2013.

The Rapista Mixtape Bolume 2:  Balik-Tanaw contains 17 tracks from some of the Philippines most talented underground Hip-Hop Artist and Rappers. Track includes:

I would like to thank those who participated, lend their tracks and have it included in the Mixtape. My sincerest apologies to those artists included in this mixtape, sorry if the release date was delayed. You will be forever part of the Rapista History. I would like to give props to those underground artists, camps/production and followers of Rapista and Hip Hop in general. I know I can’t name all of you but I would like to take this opportunity to give shoutouts to Skipp (Murderin Production), Masta G (Murderin Production, 207 Southside), Rhondee (El Grande Records), Pansky, Thelfrank, TopSide Production, GMT Empire, InfamousMobb Production, AK Fella, Smiddy (Nobelistas, URP), Butchoy (Dreamz Production), Coolantro, Sigaw ng Tundo, Penper, Lady ILL, Slim-O, Baluarte ng Cavite (BNC Production), Akuzzado, El Thalento, D-Rodd, Real Soul Entertainment, 77 Swagger, Imma Flip, Scan aka Kalibre, Thugkyle, Big-L, PHS, Pixel Strato, P3T, PHS (Pinoy Hip Hop Superstar), BossMac (Back2Gaming). Sorry if I can’t name you all. Listen & Enjoy!